Public transportation in California is operated as a government service, similar to police, fire and library service. Transit service is typically provided by public agencies through cities, counties or joint powers authorities organized specifically to provide transit, or by special transit districts designated in state law. As government agencies, these entities all rely on a mix of different funding streams to pay for their programs, including taxes, regulatory fees, and bonds. Transit agencies also collect fees from riders, called fares.

The main source of state funding is the State Transit Assistance (STA) program. Since its creation in 1971, the STA program has been the only ongoing source of state funding for the day-to-day operations of public transit. Funded entirely from the state sales tax on diesel fuel, the STA program can account for as much as 70 percent of the total budget for some transit providers. The State Controller allocates STA payments to transit systems quarterly.

While California’s transit agencies provide an excellent level of service, over the years, many observers called for enhanced funding, in order to grow local and regional transit systems and expand service to more Californians. Enter Cap and Trade and Senate Bill 1 (Beall and Frazier).

The FY 2014-15 Budget Act contained two key elements related to Cap and Trade and transit: a one-time budget year appropriation of $872 million in Cap and Trade revenues and a long-term funding plan dedicating 60 percent of future revenues to specific transportation-related programs. For a detailed description of the transit-related programs, please see the Association’s Overview of 2014 Cap and Trade Legislation and Opportunities for Public Transit.

The remaining 40 percent is available for appropriation by the Legislature and the Administration in each fiscal year. Transit agencies routinely receive additional funding through this process, usually for deployment of zero-emission buses and the buildout of supporting infrastructure. See the Association’s Zero-Emission Bus Regulation page for more information about this funding.

As part of the long-term expenditure plan, state law tasks several state agencies – the Strategic Growth Council (SGC), the California State Transportation Agency (CalSTA), the California Department of Transportation (Caltrans), CARB, and the California Environmental Protection Agency – with producing guidelines for each of the aforementioned programs, as well as specific elements governing all programs, such as defining disadvantaged communities and methods for measuring GHG reductions. For information on these, please visit the Association’s Cap and Trade Program Information page.

The $5.24 billion/year funding package generates new revenues from various taxes and fees and is designed to repair and maintain our state highways and local roads, improve our trade corridors, and support public transit & active transportation. It is estimated that SB 1 will direct more than $700 million in new public transit funding annually. Some of the revenue sources will grow or are adjusted up over time. A breakdown of SB 1’s funding for public transit can be found in the following table: 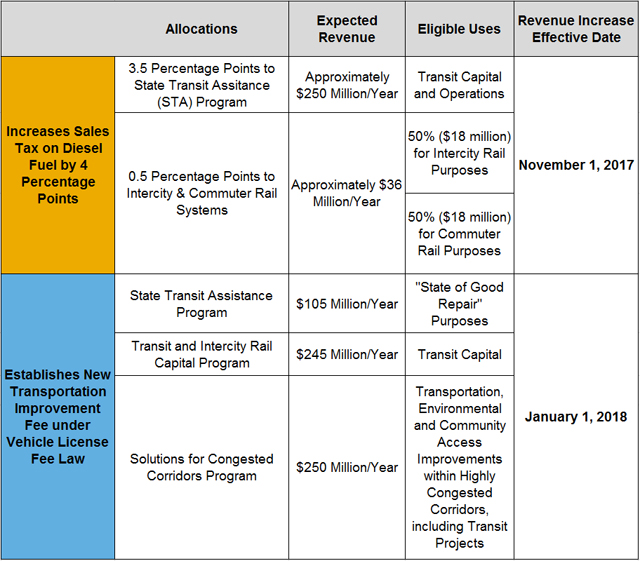 The funding package also advanced a constitutional amendment – ACA 5 (Frazier and Newman) – to dedicate for transportation purposes all vehicle fee and gasoline or diesel tax revenues raised by SB 1, as well as some existing transit funding sources. Designated as Proposition 69, the measure overwhelmingly passed on June 5, 2018.

Shortly after SB 1 was enacted, opponents of the funding qualified a measure for the November 2018 ballot which proposed to eliminate the new SB 1 funding and require any future fuel tax increases to go to the voters. The measure qualified and appeared as Proposition 6 on the November 2018 ballot. Voters rejected the repeal effort, with 56.8 percent voting No on Prop 6. The landmark transportation funding package – SB 1 – will ensure that the next generation of Californians will have access to more and better public transit.