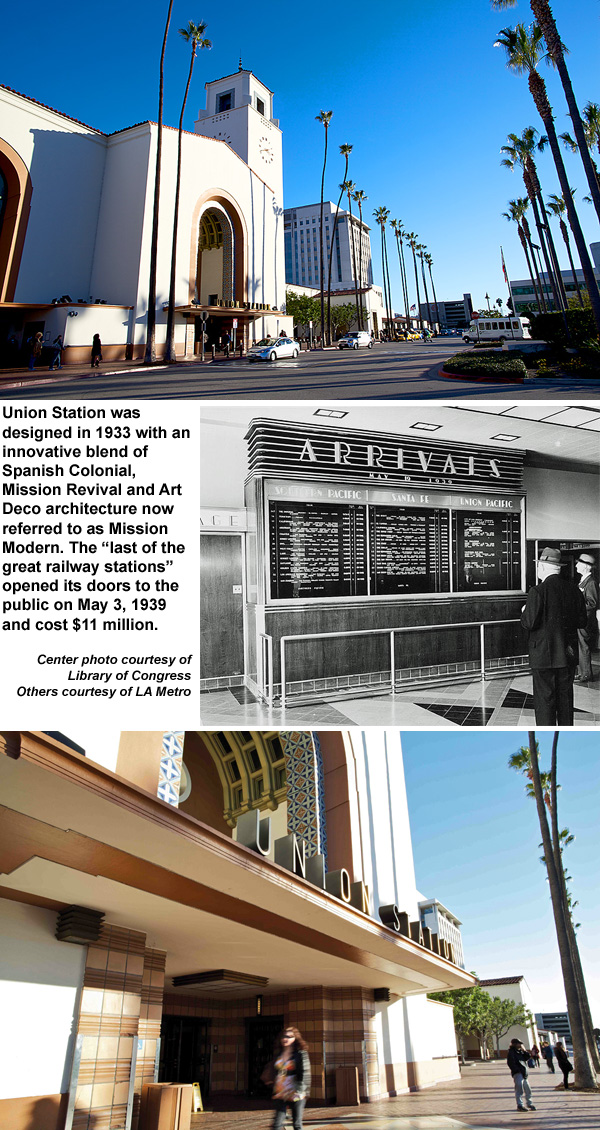 Union Station, considered by many “the last of the great railroad stations,” recently marked its 80th anniversary in an event bringing together elected officials, Los Angeles County Metropolitan Transportation Authority (Metro), Metrolink, Amtrak and Caltrans executives and stakeholders. The station opened its doors to the public on May 3, 1939.

“Of the 100,000 people who walk through Union Station each day, few probably realize that they are passing through a historic landmark designed by the same architects who designed LA City Hall and many other local landmarks,” said Metro Board Chair and L.A. County Supervisor Sheila Kuehl. “Over the last eight years, Metro has invested tens of millions of dollars to restore and improve this landmark station so that future generations can enjoy its beauty while relying on Metro’s services to get them where they need to go.”

First commissioned in 1933, Union Station was designed by the father-and-son architect team of John and Donald Parkinson with an innovative blend of Spanish Colonial, Mission Revival and Art Deco architecture now referred to as Mission Modern. The cost, $11 million.

“For many Angelenos and visitors to the heart of Los Angeles, Union Station is a special place where they connect or transfer to work, school, shopping, and entertainment,” said L.A. County Supervisor and Metro Board Member Hilda L. Solis. “For 80 years, this historic Union Station has welcomed people to Los Angeles with an elegance and grandiosity that is rare in today’s architecture. I look forward to Union Station continuing to play an integral part of the story of our region for another 80 years, with many future adventures to come.”

Union Station began its journey servicing 33 trains and 7,000 passengers per day and has evolved into a vibrant transportation center in the heart of Los Angeles, serving more than 100,000 passengers daily with 440 trains on 14 platforms.

Since acquiring the station in 2011, Metro has led a $48.6 million comprehensive planning and restoration program to bring this magnificent train station back to its original glory and prepare for the future with improvements for passengers on a local and regional scale.

Metro has also incorporated amenities for active transportation, which include Metro Bike Share and a Metro Bike Hub, with facilities for storing, repairing or buying bicycle parts and accessories.

Restoration improvements include restoring the façade, wood and metal work at the station, an upgraded wayfinding signage program, a new heating, ventilation and air condition system that includes an emergency power system and expanded and improved public restrooms. Additionally, the Fred Harvey Room, closed since 1967, has once again opened its doors, housing the Imperial Western Beer Company, a premium downtown Los Angeles destination.

Metro’s Link US Project will play a critical role in transforming Union Station by extending the rail tracks over the Highway 101 freeway to increase regional rail capacity and accommodate a future California high-speed rail system. The project also includes a new passenger concourse that will improve the design and management of public spaces with new plazas, transit and retail amenities to enhance the customer experience.

Metro is working with the City of Los Angeles to develop the Connect US Action program, a public improvements plan that prioritizes pedestrian and bicyclist mobility to and from Los Angeles Union Station, the 1st/Central Regional Connector Station and the surrounding historic and culturally significant communities of downtown Los Angeles. Approximately $60 million in grant funds has been secured to implement Connect US, which will dramatically transform how people travel in and around Union Station.

Another key project includes the Union Station Forecourt and Esplanade improvements that will enhance safety and connectivity. The improvements will transform Union Station’s front door on the west side of the station by removing the existing surface parking lot and replacing it with a new civic plaza, a new esplanade on Alameda Street for pedestrian and bicyclists, and a new grand crossing between the station and El Pueblo, the birthplace of the City of Los Angeles.

On Saturday, May 4, Union Station welcomed Angelenos to enjoy the beauty and history of the beloved downtown landmark. Admission was free to see concerts, live entertainment, dance, train exhibits, a family fun zone, arts & crafts, guided tours and many other exhibits at the iconic transit hub.

Union Station’s restaurants – Imperial Western Beer Company and Cafe Crepe – offered specialty menus to commemorate the anniversary. Also available were the city’s hottest food trucks and a festive picnic area to provide guests with a diverse and delicious taste of L.A. throughout the day.