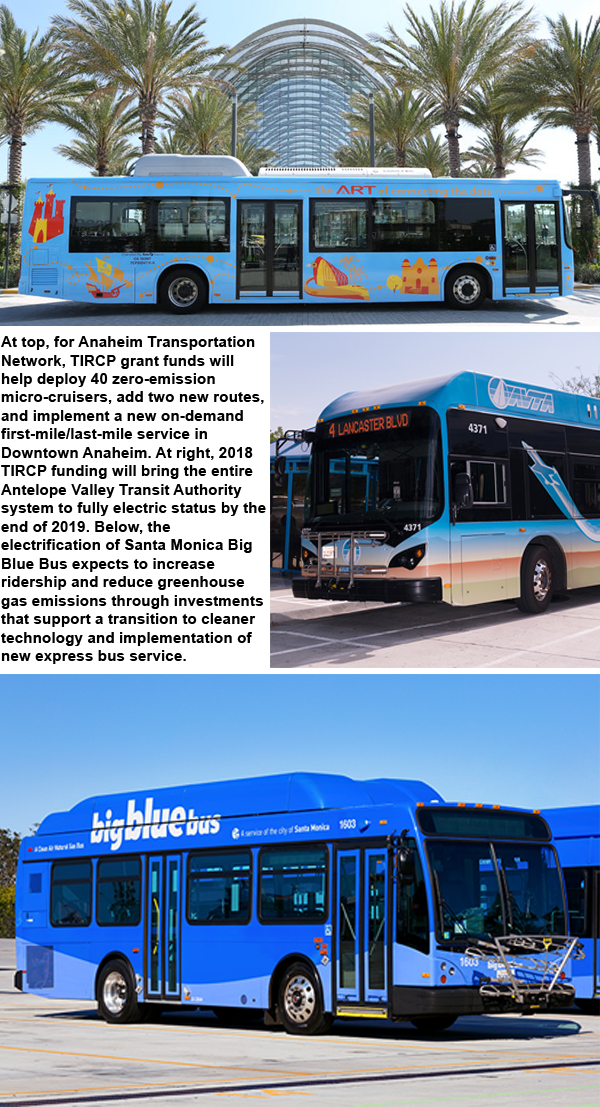 The State of California’s Transit and Intercity Rail Capital Program (TIRCP) was created by Senate Bill 862 (Chapter 36, Statutes of 2014) and modified by Senate Bill 9 (Chapter 710, Statutes of 2015) to provide grants to fund transformative capital improvements that will modernize California’s intercity, commuter, and urban rail systems, and bus and ferry transit systems. Objectives of the program include reducing greenhouse gas emissions, expanding and improving rail service to increase ridership, the integration of different rail and bus systems, and improved rail safety.

The TIRCP is funded primarily from SB 1 revenues, receiving $250 million annually from these new transportation funds. The TIRCP also receives auction proceeds from the California Air Resource Board’s Cap and Trade Program, with proceeds deposited into the Greenhouse Gas Reduction Fund. The California Department of Transportation (Caltrans), in collaboration with California State Transportation Agency (CalSTA), is responsible for administering the program.

The TIRCP program provides major benefits towards meeting the state’s climate and air quality goals, with a total reduction of more than 32 million tons of greenhouse gas emissions.

Last month, transit agencies proudly announced their recent grant awards. Of the 28 projects recommended for funding, 26 are located within disadvantaged communities or low-income communities. Here are a few examples of the variety of transit projects awarded TIRCP funding in FY2018.

In receiving this grant award, AVTA has been allocated the remaining funding necessary to support the agency’s aggressive goal of being the first in the nation to transition to a 100 percent zero-emission battery electric fleet. This grant is the third such grant to be awarded to AVTA over the past several years by the State of California, representing the culmination of a vision set forth nearly four years ago by the AVTA Board of Directors. This specific grant will be used to purchase seven zero-emission coaches and 12 inductive secondary charging pads.

The final component of the program being funded by the grant is the construction of three new transit centers, which will expand zero-emission bus service in the rural east side of the Antelope Valley. These additional stations will complete the valley-wide loop for en-route charging, and will provide better connectivity to regional mobility options, health care access, social service access, educational opportunities, and employment.

As part of its #ElectrifyAnaheim program, the Anaheim Transportation Network (ATN) was awarded $28.6 million in grant funds. The funds will be used toward the purchase of 40 all-electric zero-emission buses to serve ATN’s growing ridership and replace its aging Liquefied Natural Gas (LNG) buses.

The grant will also fund the acquisition of 10 small-capacity all-electric vehicles as part of ATN’s proposed on-demand e-hailing MicroTransit program in the CtrCity Anaheim downtown corridor. To accommodate the new fleet of vehicles, the grant also provides funding toward a new solar-powered maintenance facility.

"Receiving this grant is an important step in launching the Electric Blue pilot and getting us on the road to a 100 percent zero-emission fleet as envisioned by the Santa Monica City Council,” said Ed King, Director of Transit Services, in a written statement. “Our continued commitment to sustainability will play a significant role in reducing not only the city’s carbon footprint, but our entire service area in our continuing effort to expand mobility options for our community."

The Sacramento Regional Transit District (SacRT) is the recipient of $64 million in grant funding to implement the first phase of a rail modernization program. It will also be used to modify several light rail stations to accommodate the low-floor style of the new light rail vehicles, which are easier to navigate for people with disabilities, as well as for those with bicycles, strollers, and luggage.

Efforts to modernize the rail fleet will save SacRT money in high maintenance and repair costs that are associated with keeping light rail cars in service past their 30-year useful life. It’s anticipated that the new low-floor vehicles will be in service by spring 2021.

A $10.788 million award of TIRCP funds will go to the Solano Transportation Authority for Solano regional transit improvements. This infusion of funding will increase frequency and reduce travel time on a restructured, zero-emission, electrified SolanoExpress system, capital improvements at three strategic locations, electrification of 13 buses in its long-haul fleet, and replacement of 14 aging diesel buses on the local system.

“With resources such as the SolanoExpress regional bus service, two Capitol Corridor train stations, a ferry terminal, and connections to BART and Sacramento Regional Transit, Solano County will now have the opportunity to better integrate all of these services and offer convenient and reliable transit options to commuters,” explains Solano Transportation Authority Board Chair and Mayor of Suisun City Pete Sanchez. “These funds will help considerably as we launch the SolanoExpress Phase 1 Implementation on July 1, which streamlines the system from seven routes to three, and improves performance and travel opportunities for our riders.”

The San Diego Metropolitan Transit System (MTS) has been awarded $40.9 million from the TIRCP program. The grant funding will be used for a mix of bus and light rail improvements, including funding to purchase 11 new zero-emission buses and operating Rapid 925 – a new high-frequency, limited-stop bus service.

“Rapid has been very popular with our riders and we look forward to adding more service to a growing part of the region,” says MTS Chief Executive Officer Paul Jablonski. “This is a highly competitive grant program. This grant funding will help our efforts to maintain a solid state-of-good repair and introduce zero-emission buses to the market.”

For more information about all 28 projects that will benefit from 2018 TIRCP grants, see the Transit and Intercity Rail Capital Program Project Detail Summary.