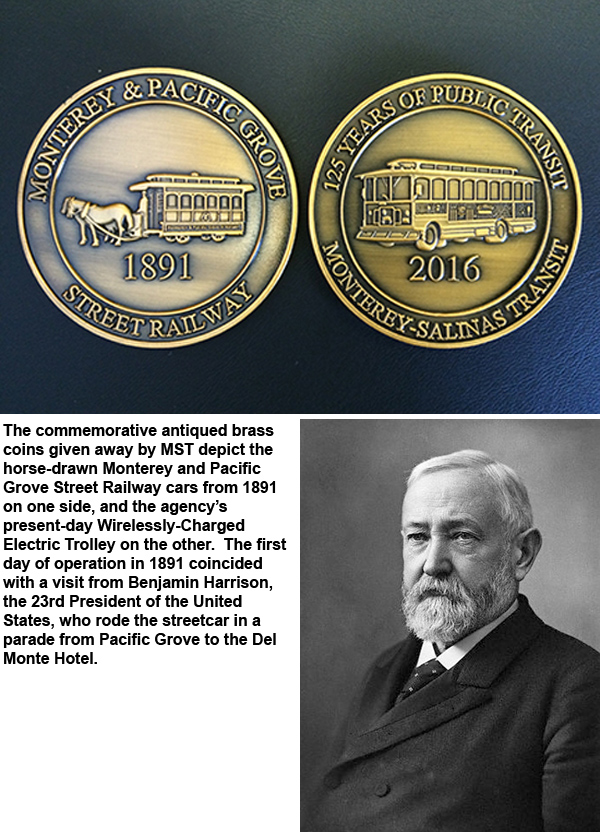 April 30 marked the 125th anniversary of the start of public transportation in Monterey County. In celebration of the anniversary, Monterey-Salinas Transit (MST) handed out commemorative coins to passengers on the MST Trolley throughout the anniversary weekend. The antiqued brass coins depict the horse-drawn Monterey and Pacific Grove Street Railway cars from 1891 on one side, and the present-day Wirelessly-Charged Electric Trolley on the other.

It was in 1891 that the Monterey & Pacific Grove Street Railway system inaugurated transit service locally with horse-drawn streetcars operating on a series of rails laid in the existing road network. The rail network connected then world famous Del Monte Hotel (now the home of the Naval Postgraduate School) through Oak Grove neighborhood to downtown Monterey and the Presidio of Monterey via Del Monte Ave, Alvarado, Munras, and Tyler Avenues continuing on Lighthouse Avenue through New Monterey and terminating at 17th street in downtown Pacific Grove.

The first day of operation coincided with a visit from Benjamin Harrison, the 23rd President of the United States, who rode the streetcar in a parade from Pacific Grove to the Del Monte Hotel.

The horse-drawn streetcars ran until 1901 when they were replaced by an all-electric powered street car fleet operated by the Monterey Gas & Electric Company in 1903. Monterey & Pacific Grove Railway electric streetcars, which ran in Monterey and what is now Seaside in a variety of forms through 1921, were abandoned as unable to compete with more cost-effective rubber-wheeled, internal combustion engine-powered buses operated by the Bay Rapid Transit Company.

Bay Rapid Transit operated buses for over 50 years until the Monterey Peninsula Transit (MPT) joint powers agency took over public operation in September 1974. In July 1981 MPT took over public transit operations for the City of Salinas forming the Monterey-Salinas Transit joint powers agency. In July 2010 Monterey-Salinas Transit District formed with the addition of the cities of Sand City, Gonzales, Soledad, Greenfield, and King City to the governing board.

Monterey-Salinas Transit District buses and its wirelessly-charged electric trolley continue to operate along the original routes of the first horse-drawn street cars. In the intervening years MST continued to carry on the over century old tradition of providing valued transportation services to people who live, visit, and work in the Monterey Bay region.