The Making of A Transit System:
Storied Transit Leader Leaves a Lasting Legacy 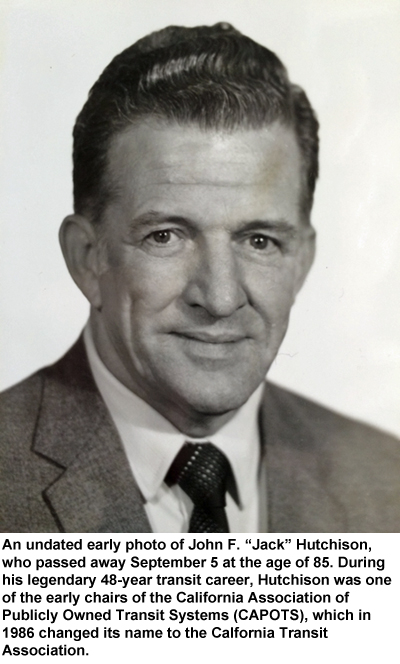 Born in Glasgow, Scotland, Hutchison came to the United States following World War II on a trans-Atlantic trip on the Queen Mary; settling in Omaha, Neb. to be near his sister. Shortly after arrival, he joined the accounting department of privately owned Omaha & Council Bluffs (O&CB) Street Railway in 1948. While with O&CB and its successor, Omaha Transit, Hutchison was part of the transition from streetcars to buses.

Accounting always played an important part in the career of Hutchison, who held positions of auditor and treasurer/controller, prior to becoming the head of Santa Monica.

Jackson tells how Hutchison was masterful at understanding how to manage the cost per passenger and knowing how many people he could fit on a bus. At the time of his retirement in 1995, Santa Monica’s system carried five passengers per mile of service, making the cost of providing service per passenger only 82 cents, a very favorable farebox ratio.

“Jack mentored me as a peer,” continues Jackson. “Jack’s knowledge of numbers and the importance of setting aside money was embedded in me. As a result, when the recession hit in 2008, because I had followed his example, Long Beach Transit was able to weather the storm through 2013. We were able to ride out the financial hardships, including fewer subsidies from state and federal governments and declines in ridership. In recent years, Long Beach Transit froze pay raises, had to raise fares, and asked employees to pay more toward their pension funds. But no matter the financial difficulties, it was always my goal to make sure no employees were laid off and we’ve never had a layoff. We’ve never run a deficit operation and that’s something that, as a businessperson, I’m very proud of. I owe that to Jack and it has benefited the people of Long Beach Transit too.”

Being tight-fisted is a positive legacy of Huchison. Jackson offers this visual with a chuckle, “Remember Uncle Scrooge McDuck? The Scottish duck created by Disney? Being a Scot, that’s how Jack sounded too, and they both had a pile of money in a vault. When Jack retired, John Catoe inherited it.”

Santa Monica, at the time of Hutchison’s retirement, was in a very strong financial position. As his successor, John Catoe, came on board, the city wanted to expand its transit services.

As a result, John Catoe, did indeed make the most of the situation when he succeeded Hutchison as General Manager of Santa Monica Municipal Bus Lines. In a recent California Transit Association Gallery of Leaders interview, Catoe had this to say: “Jack was a phenomenal leader and individual. When I went in, funding wasn’t an issue because Jack did one of the best jobs in the industry of setting up the funding. That gave me the opportunity to not worry about that part of it. I had to keep track of it, but it was already done. So I had the resources to go in and purchase new vehicles, we began the process for building a new maintenance facility, and downtown hub. That was all possible because Jack laid the financial foundation. I would not have been as successful, if it wasn’t for Jack.”

Coming up through the ranks at the Big Blue Bus was Stephanie Negriff, who succeeded John Catoe when she became its director (2002 to 2011).  But she started at Santa Monica in 1986, and was a part of the significant changes brought about by Catoe and also worked with Hutchison.

“I was very excited to be in this major metropolitan area discussing regional service policy and coordination and learning about the various dedicated funding that was available in Los Angeles and in the state,” Negriff is quoted as saying at the time of her retirement. “I also had the extreme privilege of working with the then-director of transit services, Jack Hutchison, who is in the APTA Hall of Fame. He's certainly a person that continues to be a mentor for me today, and one from whom I learned a tremendous amount about legislative and funding issues and the importance of making sure all of the transit systems in this area were at the table to make sure we received our fair share of the funding that was available.”

Also during the interview at the time of her retirement, Negriff commented, “I'm looking at some of the funding detail going back to 1986 and 1987 because it's applicable to some of the issues that we're working on now. We started reserving monies to plan for light rail transit back in the mid-1980s, and now, as I am ready to depart the city, they're actually building Phase II of the Exposition Line that's going to come to Santa Monica. So, it really does reflect on a full circle moment of putting monies together that helped develop an alignment that is compatible with the city's land use and transportation goals. That's something that you don't often get to experience [on a] long-term, major capital project.”

Hutchison’s own accomplishments at Santa Monica include extending bus service to Marina del Rey and Los Angeles International Airport; establishing two crosstown routes; and initiating freeway express service from Santa Monica to downtown Los Angeles. He also used outside funding to modernize Santa Monica’s fleet. As part of a long-term capital program initiated in 1979, Santa Monica expanded and remodeled its facility at a cost of $13.7 million.

APTA honored the achievements of Hutchison and Santa Monica by selecting the system for its Outstanding Achievement Award in 1987 and again in 1992.

When asked about her father, Janet Sutter says one family memory in particular stands out, “He had the buses marked ‘Nations #1 Bus Line’ and my sister asked him once, ‘How do you know that?’ and my Dad's reply was, ‘Nobody has ever disputed it and until someone disputes it, I am going to keep saying it!’”

“I guess the thing my Dad was most known for is being a tight-fisted Scotsman...but it was a good thing for the bus line. He ran a great system, kept low fares, and left the agency with a huge surplus.”

Post-retirement, Hutchison kept up with the transit industry. According to Sutter, he visited the Big Blue Bus offices on occasion and received transit-related news. “I would speak with him often about OCTA, where I work,” adds Sutter, “and he was very interested in the new Metro Expo Line that will come into Santa Monica.”

Besides chairing CAPOTS, Hutchison also served on state, regional and local transit advisory and technical committees, and served as an APTA regional director.

Jack Hutchison leaves behind a transit leadership legacy that has touched other public transit leaders and helped lay the foundation that enabled Santa Monica’s Big Blue Bus to expand at a critical time in the systems’ history.